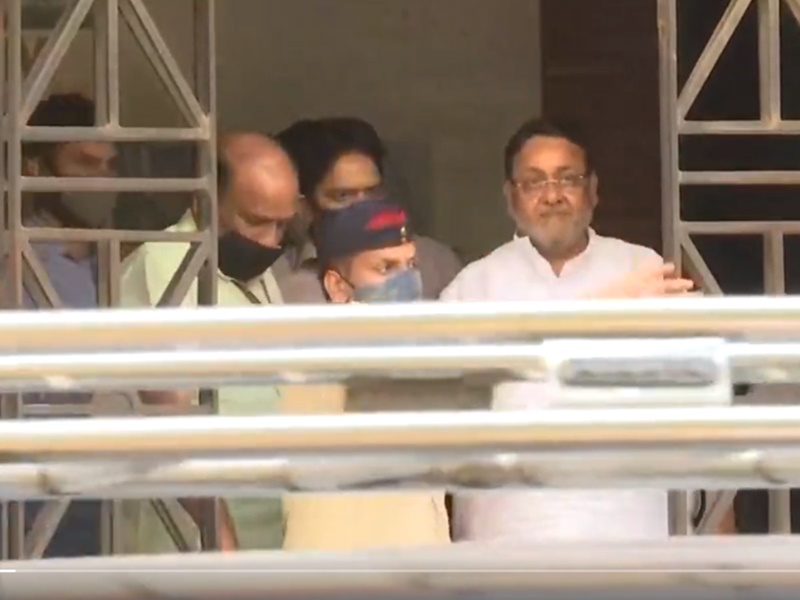 Nawab Malik News: During the investigation, some evidence has come to light regarding the purchase of D-Gang property by Nawab Malik.

Nawab Malik News: The court has sent Maharashtra Minister Nawab Malik on ED remand for 8 days. The Enforcement Directorate had sought 14 days custody of NCP leader and Maharashtra minister Nawab Malik in the money laundering case. But the court remanded him for only 8 days. That is, Nawab Malik will remain in the custody of the ED till March 3. Let me tell you that Nawab Malik was arrested by ED on Wednesday. The action was taken after questioning by the Enforcement Directorate (ED) in the money laundering case. The case relates to the sale and purchase of properties and money laundering by Mumbai underworld fugitive gangster Dawood Ibrahim and his associates. Recently, the ED conducted several raids and arrested Dawood Ibrahim’s brother Iqbal Kaskar.

According to sources, during the ongoing investigation, some evidence has come to light regarding the property purchased by Nawab Malik. Amid mounting tensions between the Maharashtra government and the Center, the country was taken to the Enforcement Directorate (ED) office this morning for questioning. Central Investigation Agency officials arrived at the house of the Nationalist Congress Party (NCP) leader at 6 am and interrogated him for an hour. He was then brought to the ED’s office and questioned again for several hours.

As the country was being questioned, NCP workers staged a protest near the party headquarters near the ED’s office in south Mumbai, chanting slogans criticizing the BJP-led central government and the probe agency. The workers were seen walking towards the ED office but were stopped by police near the party office. After which they protested. Malik’s son-in-law Sameer Khan was also arrested by the Mumbai unit of the NCB last year in a drug case.

Party spokesman Sanjay said the protest was against the unjust interrogation of Nawab Malik. We will not bow down. Shiv Sena MP Sanjay Rawat and NCP chief Sharad Pawar have accused the central agencies of being politically motivated and have claimed that anyone who speaks against the Center and its investigating agencies should be punished. Is targeted. The BJP has denied allegations of political revenge and accused the country of buying land from an accomplice of gangster Dawood Ibrahim. Ram Kadam, a BJP MLA from Ghatkopar West in Mumbai, said in a video statement that it was not about any party or individual.

# View NCP workers gathered outside the Enforcement Directorate office in Mumbai and chanted slogans after the arrest of party leader and Maharashtra minister Nawab Malik. He has been arrested in connection with the Dawood Ibrahim money laundering case. pic.twitter.com/cY6FDytpZq

# View Mumbai: NCP leader and Maharashtra minister Nawab Malik is being taken out of the Enforcement Directorate office for a medical examination.

He has been arrested by the Enforcement Directorate in connection with the Dawood Ibrahim money laundering case. pic.twitter.com/UMAVK5ZEVW

Protesting against the arrest of party leader Nawab Malik by the ED in connection with the Dawood Ibrahim money laundering case, an NCP worker said, “Maharashtra will not bow down to Delhi.”

“Wherever there is opposition, the BJP uses government machinery to target them,” added another NCP worker. pic.twitter.com/O8BKU5IZke