Microsoft was supposedly developing a “lite” version of the Surface Duo 2, which was recently said to have been offered on eBay. According to the pictures, the allegedly leaked phone includes a dual-camera array on the back and a polycarbonate casing. The purported eBay listing has no other details regarding this device’s specs. This Surface Duo 2 model appears to be a “dev unit.” Since the business allegedly canceled this device in 2021, we might not be able to get our hands on it.

See also  Nothing Phone 1 First Impressions: Lighting Up the Competition

Windows Central claims a Microsoft Surface Duo 2 model just appeared on eBay. Notably, the phone looks like a matte-finished plastic casing with rounded sides. Additionally, it is rumored to include flat panels without the look bar and a twin back camera arrangement. According to reports, the purported listing, which has since been removed, did not mention this handset’s characteristics. This product could have been a Microsoft mid-range product. However, the article claims that the business canceled it in 2021. This model, allegedly under the codename “Cronos,” was expected to launch later this year at a cheaper cost than the Surface Duo 2. It could have included a Qualcomm SoC from the high midrange.

In contrast, the $1,499 Surface Duo 2 launched in September last year. A Qualcomm Snapdragon 888 SoC powers it. The phone has two 5.8-inch PixelSense screens that, when combined, provide a viewing area of 8.3 inches. Additionally, it has a look bar so users can check for alerts even when their phone is folded. The Surface Duo 2 has a 12-megapixel selfie camera and a triple 16-megapixel back camera array. The exterior is made of glass, and the frame is strong aluminum. 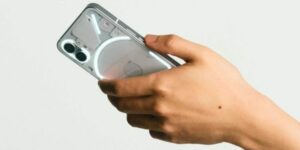